THE WHAT, WHY AND WHO OF TAIKO MEANTIME

Taiko Meantime strike at the heart of Taiko drumming’s magic: an enthralling show combining traditional Japanese rhythms and techniques with eclectic, original compositions, enticing their audience to follow them on a musical journey.

Taiko Meantime were founded in Greenwich in 2001 with generous support from the Japan2001 festival. Their aim, to provide an enlightening musical Taiko experience is satisfied by numerous theatrical performances.

They returned to Japan in 2010 to perform concerts in Wakayama. They performed for high-profile events at both the London 2012 Olympics and Paralympics, and featured in much of the press and media coverage for those events in the iconic setting of London’s Leadenhall Market. They have had appearances on both BBC (Family Prom in the Park) and featured in Channel 4’s ‘How Music Works’ series.

Collaborations of note include a project with Hana-Yui (of Kodo) and extensive world-wide tours with the Henri Oguike Dance Company, performing “Second Signal”, a work melding Taiko and contemporary dance that received critical acclaim.

From 2015-17 they collaborated with Chieko Kojima (of the Kodo drummers) in their unique telling of the Dojoji legend, a production that brought together the Japanee arts of taiko, dance, music and story-telling. This culminated in a full performnce of Dojoji at Peter Gabriel’s WOMAD Festival at Charlton Park, Wiltshire in July 2017.

Taiko Meantime also have an active educational programme, bringing the power, discipline and fun of Taiko drumming to children in schools. 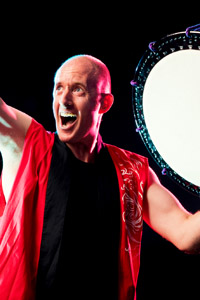 Mark Alcock, leader of Taiko Meantime, studied and performed Taiko drumming with the Tennon Daiko drummers of Wakayama prefecture in Southern Japan. His teachers include Katsuji Kondo, former front man of the Kodo drummers. He returned to the UK in 1994, and after playing with Mugenkyo and Joji Hirota, he founded Taiko Meantime in 2001.

Mark also leads Taiko drumming workshops, having offered the first hands-on Taiko workshops in the UK to members of the public and schools. Since 2000 he has extended the educational side of his work to the corporate world at Rhythmworks, where he uses Taiko to unite teams in business. 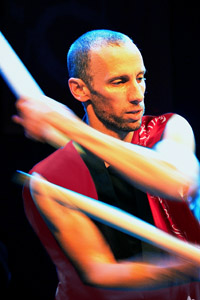 Edward Pickering learned to play Taiko with Ataka Taiko group in Ishikawa, Japan in 1997 and was a regular performer for them for three years. In 2002 he joined Taiko Meantime, with whom he has performed on three continents. Edward plays Taiko with an energetic and physical style which reflects his interest in endurance sports. 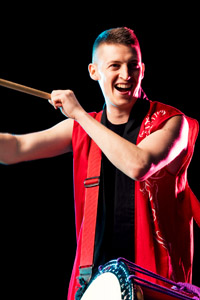 Jack Painting‘s passion for music and the performing arts led to him to discover and pursue the art of Taiko Drumming. Having studied kit drums and music performance at the London Centre of Comteporary Music, and graduating with a 1st in Theatre and Film studies from the University of Reading, Jack completed Taiko Meantime’s apprenticeship program in early 2011. He is a former kickboxer, a member of the London Beefeaters Military drum corps and continues to work as a kit drummer. 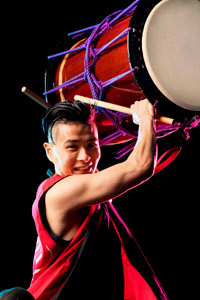 Akinori Fujimoto was born and raised in Osaka, Japan. As a teenager he moved to the UK and trained as a kit drummer, but has always had the love for the sound of ‘Taiko’ resonating during festival seasons in his hometown.

Aki started to play the Taiko drums in 2006 and he became an official member of ‘Amanojaku Hozonkai’ in April 2018 to be accepted as a student to study under Yoichi Watanabe.

Aki joined Taiko Meantime in 2016 and has been a regular performer and an active member in the creative process of arranging Taiko Meantime pieces ever since. 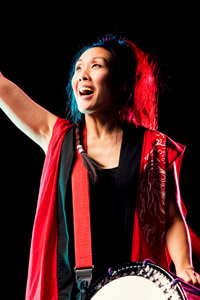 Jennifer Tomomitsu first came across taiko drumming in 2000 in Nagano prefecture, Japan and, for two years, played with Ryujindaiko-hozonkai in the small town of Miyota and performed at their annual dragon festivals. She is a former classical pianist. 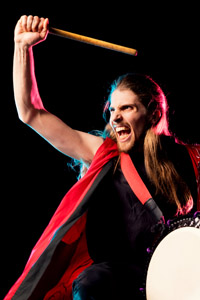 Tom Hull is a kit drummer with a background of Taiko drumming. He passed the Meantime apprenticeship course in April 2013.